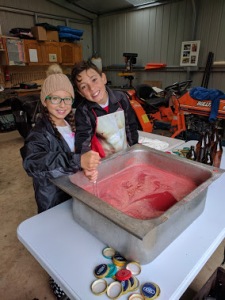 It’s been the second year of the tomato harvest here at Abbeydore and we’ve been inundated with, yet again, an amazing crop of heirlooms (from Moza’s dad’s 40-year-old seed stock) and San Marzano which we planted specifically for tomato passata. This year we decided to plant enough to use to make our own bottles, rather than buy-in as we have in the past.

We’re now up to our fifth bottling, and are on track to make around 100 bottles or so!

So, what do we use it for? Our passata forms the major ingredient of ragu, cooked in the traditional way it’s been made in Abruzzo forever, and something we’ve been learning and perfecting over the past five years or so. Here goes!

Sauté selected meats in a good slug of olive oil – we usually use one chicken wing, leg or thigh cutlet (on the bone); half a pork spare rib; a small piece of chuck (or one osso buco) and a handful of mince (I’ve also used two duck marylands and one duck neck to great effect). Once the meat is browned each side, remove and set aside.

Make a soffritto by finely dicing one-third of a brown onion, a small piece of carrot, small stick of celery, one garlic clove and some parsley (I also dice up a small piece of capsicum, red or yellow, which sweetens the flavour).

gently fry the the soffritto, then add one bottle of home-made passata and one bottle of bought passata (600-700ml). Bring to the boil and add salt and pepper. Shake bottles well before using and rinse out with a touch of boiling water, and add this also.

Add the meat and any juices, bring back to boil, check again for salt then turn down temperature until a “gloop-gloop” is happening (hard to explain but you know what I mean – pretty low temp but with the sauce bubbling).

Cook for around one and a half hours or until the sauce has thickened and it looks “cooked”.

Remove the meat (except the mince – that’s a nice addition to the sauce) to a platter to serve as a second course, or store in fridge for sandwiches the next day.

Add sauce to cooked pasta, along with parmesan – any shape works, but our favourite is spaghetti (No. 7) or bucatini, as well as homemade spaghetti alla chitarra. It also makes a great baked pasta, layered with plenty of parmesan and grated mozzarella and oven-baked until hot and bubbling. And don’t get me started on lasagne…

But what if I just want to use the passata on its own?

If you’re going to be cooking with just the Abbeydore passata alone (without any commercial sauce like we’ve suggested above), then it’s really important to shake the bottle well, and cook it at quite a rapid rate so that it thickens up.

We make a simple tomato sauce by melting a few anchovies in olive oil, then adding some finely diced onion, garlic, celery and fresh parsley (or fresh basil, or a bit of both!), salt and pepper, then cooking it rapidly for around 30 minutes or so until the sauce has reduced and thickened – it needs a taste, look, taste again, etc, but the final sauce will be yummy! You can use as a pizza base or served with penne finished with parmesan.

Go here to check out some images and videos of our passata days, with some selected images below. 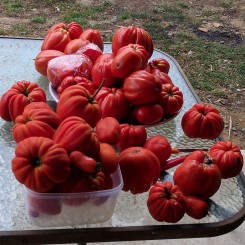